When it comes providing tiffin to kids at school, we clearly have two parties in the picture – the parents and the kids – with the first party continually trying to please the second and the second party setting the bar a little higher each time. With moms and children sharing a common ground bang in the middle of school hours – the tiffin break – every day is played like a match where the outcome and verdict are announced either with great satisfaction or with bitter complaints from either team. The only predictable thing is the suspense – for the kid, till the box is opened at lunch break, and for the mother, till the little eater comes back from school.

We conducted a survey with mothers from all across the country who send kids from four to twelve years to school, carrying lunches packed with nutrition and love. We tried to figure out which food items are best liked by children, whether there is a perceivable pattern in their preferences based upon their age group or location, as well as which food mothers prefer to offer to their children as the right source of nutrition amidst the demanding school hours. We also wanted to find out whether these food items were majorly home-cooked or store-bought, and how frequently either option was taken. 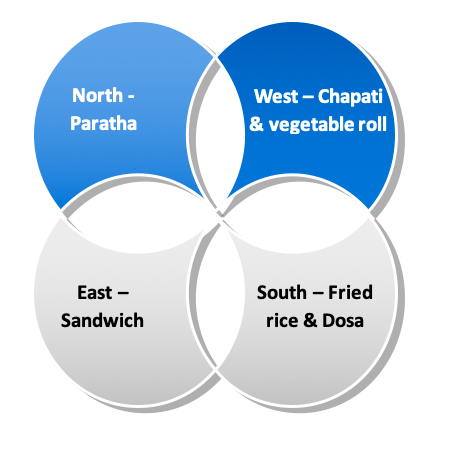 We observe a marked difference in the tiffin preferences for mothers across the north and south of India. In most of the North Indian states, mothers seem to have higher preference for noodles and pasta, while the Southern states show a significant indifference for items of similar genre. Rice and chapati seem to be more staple in the South like in Karnataka, Tamil Nadu, Andhra Pradesh and Telengana and the West like in Rajasthan, Maharashtra and others. The latter group shows a greater inclination toward offering their children home-cooked options of Indian cuisine vis-a vis the former that rely heavily on instant food of the western variety. 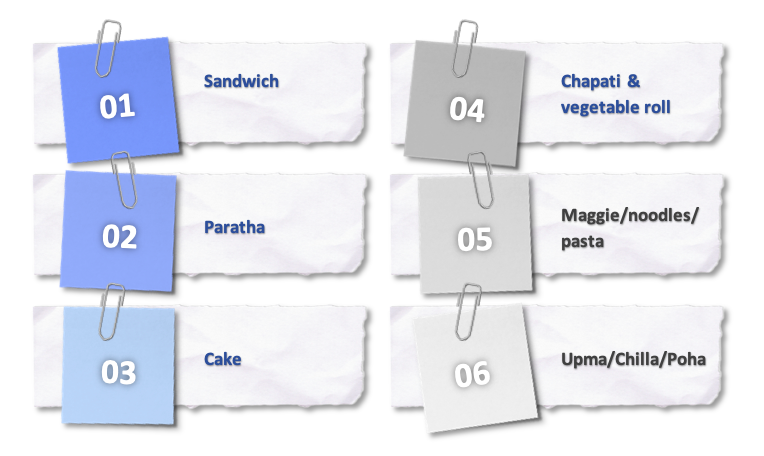 Among Indian food, chapati or paratha is a staple in the tiffin box, generally served with vegetables and curry.  Sandwiches are a major favourite with mothers and kids across locations and age groups of kids. Cakes and biscuits share the same popularity, especially for very young kids. Rice items are a common choice for school tiffin in the South, but no other region shows preference for rice dishes. Interestingly, the northern states show high preference for only two item types – noodles/pasta and sandwiches.

Kids in the 6-9 years age group are reported to prefer packaged foods like cakes and biscuits while older children express more inclination toward noodles, macaroni and pasta, as indicated by their tiffin schedule. Sandwiches rule the chart as they provide a fuss-free option for tasty as well as nutritious food in the tiffin hours. Paratha is preferred over chapati by older children as they prioritise taste over health, unlike their mothers. The younger group of children upto 6 years of age are mostly dependent on their mother’s choice of tiffin, hence get served healthier options like chapati and vegetable curry and sandwiches on a daily basis.

The favourites often change with time and change of preferences, which again change with age and exposure. The attempt to pack healthy food options, however, persists on the mothers’ part. And nothing, barring stellar marks in an exam paper, can compete with the intensity of the smile on a mother’s face other than a clean, empty tiffin box.

How Businesses are Gearing to The Changing Behavior of Consumers

Strengthening the bond between Manufacturers and Dealers

Target audience during and after the ’lockdown’ due to the pandemic